Dean of Faculty introduces "Prosecute or Protect? Article 31 (1) of the 1951 Refugee Convention and the Criminal Justice System in Scotland"

The Dean of Faculty has opened a conference to raise awareness of an important piece of asylum legislation. See his comments below.

More flexibility in the system for seeking repossession of properties in the private rented sector has been welcomed by the Faculty.

Statutory defence not to feature in Human Trafficking Bill

The Scottish Government has signalled its intention to omit a statutory defence from the Human Trafficking and Exploitation (Scotland) Bill.

The Faculty has given support to plans for a new tribunal in Scotland to deal with complaints about the awarding of public contracts.

Would FAIs before summary sheriffs give the wrong impression? 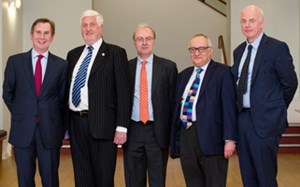 The Faculty was a proud host of the 2015 Four Jurisdictions Conference, welcoming guests from Middle Temple in London, the Bar Council of Ireland and the Bar of Northern Ireland.

The latest meeting of the Scottish Co-ordination Group was hosted and chaired by the Faculty. The aim of the group is the international promotion of the Scottish legal services sector and Scotland as a place for dispute resolution.

Lord President announces he is to retire

Lord Gill, the Lord President, has announced that he is to retire with effect from 31 May, 2015.

Important observations on freedom of expression for lawyers have been made by the Grand Chamber of the European Court of Human Rights.

The Faculty is looking forward to hosting one of the most eagerly-anticipated events in the calendars of counsel and judges throughout the United Kingdom and Ireland.