The Alva collection comprises 260 volumes from the library of James Erskine of Alva, Lord Barjarg (1723-96). Many of the books belonged to his father, Charles Erskine or Areskine, Lord Tinwald (1680-1763), Lord Justice Clerk and his brother Charles. All three of their bookplates are present in the collection. The collection was presented in 1927 by the Trustees of Dollar Academy. Most of the books in the collection are law books of the 16th and the 17th century, and are predominantly continental imprints. The non-legal part of the collection is held by the National Library of Scotland (NLS). 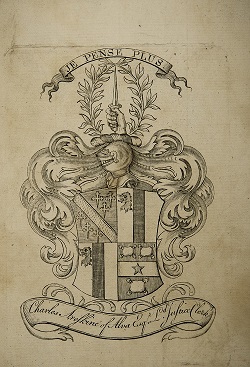 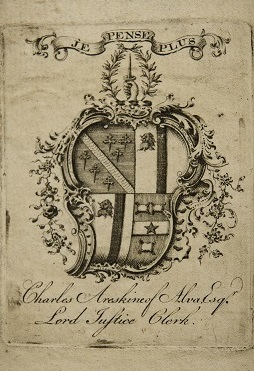 He served as the first Professor of the Law of Nature and Nations at the University of Edinburgh from 1707-1734 and maintained scholarly interests throughout his life, including a deep interest in suppressing Jacobitism.  Charles Areskine was a key figure in the Scottish Enlightenment and is one of the lawyers who had a special place in the intellectual history of Scotland due to their participation in all areas of enlightened society of the time.

Areskine’s library is of a time when the legal system encouraged foreign travel for legal training and when Scots law was being refined in the courts and the intellectual achievements of the Enlightenment were beginning to take shape.

His legal education was undertaken in the Netherlands, as was usual for the time.  He then travelled to Italy and Germany, collecting books needed for his career.  His broader interests are also reflected in his book collection.

The manuscript catalogue of his library, consisting of 1290 titles, is dated 1731 and is held at NLS.  The catalogue was however added to after 1731 with both legal and miscellaneous subject matter.

The collection includes works by Hugo Grotius and Cornelius van Bijnkershoek, key Dutch authors, demonstrating his interest in legal history, important editions of Corpus iuris civilis and collections of customary law from the Continent and England.  At the time, lawyers took a multidisciplinary approach to studies and practice, and Scots law imported the good laws from other systems so customary law from the Continent was useful in a library.  Humanist scholarship on the Corpus iuris civilis interpreted what the Roman law had actually been so that it could be used in its finest form.

Charles’s son James passed the collections to his son John Erskine, also an advocate, who subsequently passed them down to his son James Erskine of Aberdona, who was a trustee of the Dollar Institution from 1826 and may have donated a part of his grandfather’s collection to Dollar Academy (as it became), with other parts of the collection being dispersed globally.

When the collection was donated in 1927, this was just 2 years after the formation of NLS and when the Faculty still hosted NLS in its building.  The separation of legal and non-legal stock would have been in its early stages. 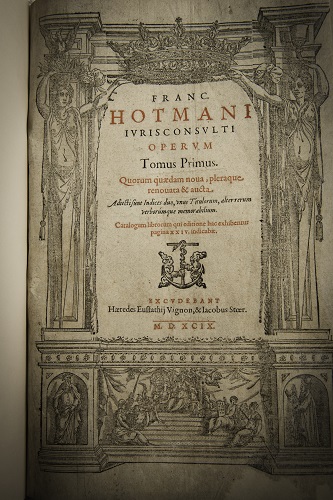 Charles’s son James passed the collections to his son John Erskine, also an advocate, who subsequently passed them down to his son James Erskine of Aberdona, who was a trustee of the Dollar Institution from 1826 and may have donated a part of his grandfather’s collection to Dollar Academy (as it became), with other parts of the collection being dispersed globally.

413 titles are held at NLS and 258 in the Advocates Library.  Of the 258, 164 have Areskine’s own bookplate, 77 have that of his son James, who practised English law and was a Baron of the Exchequer, and 3 are from James’s brother, Charles.  Most of the 258 are legal folios in Latin.  The collection in the Advocates Library includes 29 folio volumes of Session Papers.