Faculty responds to Bill on funding of civil litigation

The Faculty has pointed to "the potential to enhance justice" if US-style Damages Based Agreements (DBAs) are introduced in Scotland.

Government Communications Headquarters (GCHQ) has been required by a tribunal to undertake to destroy documents containing legally privileged material which was obtained by unlawful surveillance.

Concerns expressed by the Faculty and others have been recognised by the Scottish Parliament's Justice Committee in its Stage 1 Report on the Human Trafficking and Exploitation (Scotland) Bill.

The Faculty of Advocates has welcomed the decision by the Scottish Government that it will not proceed during the current Parliament with the proposal to end the requirement for corroboration in criminal trials. 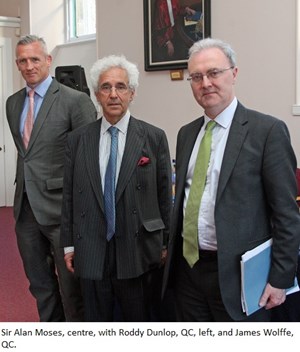 The Faculty was delighted to welcome Sir Alan Moses, Chairman of the Independent Press Standards Organisation (IPSO), as guest speaker at an event which examined media regulation.

In a speech at the opening of the Commonwealth Law Conference in Glasgow, Lord Gill, the Lord President, stressed the importance of an independent legal profession.

A 15-year struggle for disabled access to a Highlands churchyard could be on the brink of success, thanks in large measure to the Faculty's pro bono service.

An exhibition featuring a three-dimensional digital model of "The Lost Tomb of Robert the Bruce" has opened at Sir Walter Scott's Abbotsford home.