Passing on the MiniTrials baton… 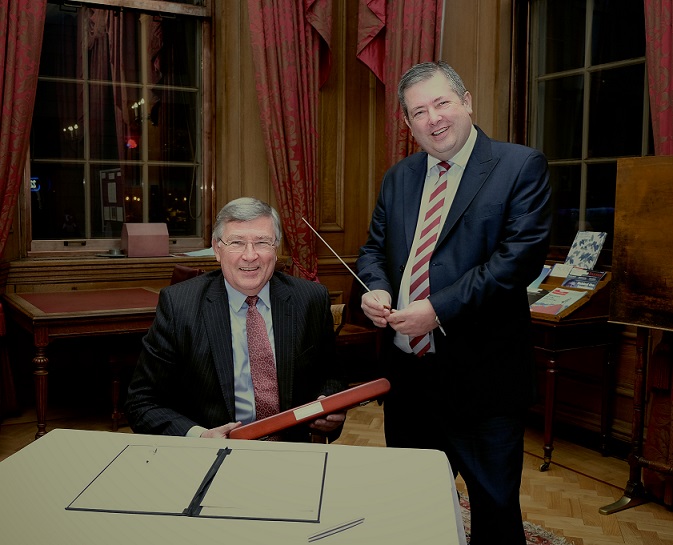 THE founder of the Faculty’s MiniTrials initiative and its linchpin for the past 17 years has passed on the baton - quite literally!

Lord Kinclaven, then Sandy Wylie, QC, was moved by a suggestion that more should be done to promote legal education in schools, and came up with the idea of mock trials where pupils played all the parts.

Since the first MiniTrial in 2002, thousands of youngsters have learned about the justice system in Scotland and, just as importantly, had great fun. There is no competition in MiniTrials, no winners, just demystifying the law in an enjoyable way.

Now, Lord Kinclaven has stepped aside and put MiniTrials into the hands of a steering group headed by his colleague on the Bench, Lord Mulholland.

Lord Kinclaven came to a handover ceremony armed with a special “MiniTrials baton” as a parting gift, and presented it to the new conductor.

“It is overwhelming that so many people are here and have given up their valuable time for MiniTrials, but they are worth it,” he said.

“The key to the success of MiniTrials has been so many enthusiastic people - in education authorities, in schools, in the legal profession and in courts. There is a great sense of goodwill, a sense of community and everyone working together.

“I like to think that MiniTrials are inclusive and accessible to all, and inspirational and aspirational. It has been a real privilege to have been associated with them for so long.”

Lord Mulholland said MiniTrials gave pupils a chance to experience a very important part of the justice system - a trial - and to play a part in it. Also, they gained the confidence to speak in public, and the discipline to analyse a case and to argue its pros and cons.

“All that is a fantastic thing for children in this country, and I wish it had been available when I was at school,” he added.

“We are all grateful to Lord Kinclaven for the leadership he has shown, and the steering group will hopefully look after MiniTrials and build on the fantastic start he has given us.”

Information about staging a MiniTrial or volunteering is on the website www.minitrial.org.uk, or by emailing minitrialsenquiries@gmail.com